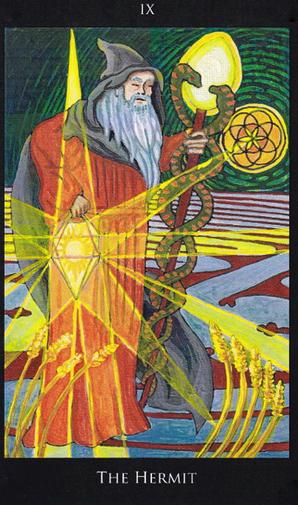 Above, the Fool from Tabula Mundi.

Below, the Universe from Tabula Mundi.

As above, so below. 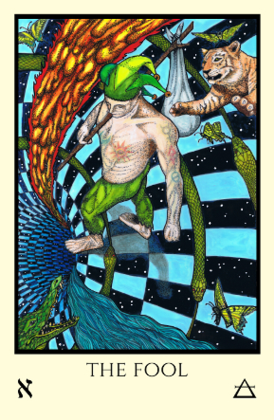 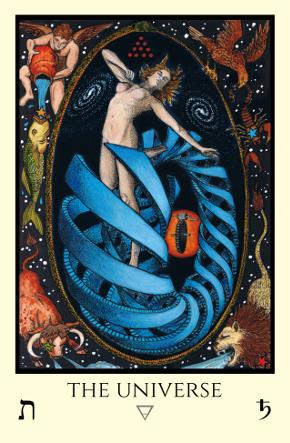 About the Art & the Artist 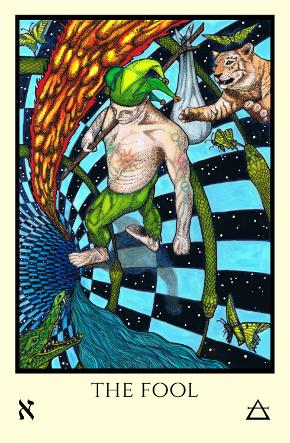 Images below are also by M.M. Meleen and are from the Tabula Mundi Tarot.

A Thoth based Tarot deck by M.M. Meleen for Atu House Publishing

M.M. Meleen is the artist behind the Rosetta Tarot and the author of The Book of Seshet. She is a Thelemite of no particular significance who prefers to remain a mystery figure in the background.

M.M. Meleen has also created the Tabula Mundi Tarot, voted best of 2014 and 2015 by Tarot Professionals,  and a full guidebook called Book M: Liber Mundi. The Tabula Mundi Nox et Lux was a black and white version funded on Kickstarter and published in 2015 . A 78 card color edition of Tabula Mundi  called Colores Arcus is available.

About the Art of the Rosetta Tarot

The Rosetta tarot deck was completed and copyrighted in 2011 by M.M. Meleen. Each original tarot artwork was done card size on paper in the size 3.25 x 4.75 inches and the art was not photoshopped other than cropping and sizing. These were true miniature paintings.

One unusual thing about the Rosetta Tarot is that the artistic mediums were chosen individually for each tarot suit, to reflect the nature of the suit. The Major Arcana as the element of spirit, with their plasticity and elastic nature, were done as original acrylic paintings. The suit of Wands as the element of Fire and thus wood, were done in a combination of colored pencils and acrylic. The suit of Swords as Air were done in a dry-point etching technique, where a metal stylus is used to inscribe a plexiglass or metal plate. The plate is inked and run through a press, and the resulting prints were hand painted in acrylic. The Cups as Water were done in a mixed media technique of watercolor, water-based ink and acrylic. The Disks as Earth were done in oil pigments (which come from earth) and acrylic. The acrylic in all suits ties together the look and the spirit element of the cards.

Like its tarot ancestors, it has a Golden Dawn heritage, based on the descriptions of the cards in Book T, and following the Golden Dawn color scales. Though there are many tarot decks to choose from, there are few true occult themed decks and fewer still Golden Dawn and Thoth based decks available. This deck aspires to offer a deck in that tradition with both potent symbolism and inspiring artwork. For those who already love the Thoth deck, using this deck for side by side card meditations may allow new facets of that deck to be revealed. Those who have resisted the Thoth and the Golden Dawn decks for differing reasons may find this deck an attractive alternative, or a user-friendly introduction to the Thoth system.

Some posts about the deck creation can be found on M.M.Meleen's older blog. A newer blog exists at www.tabulamundi.com.

The Rosetta Tarot is a traditional seventy-eight card “Thoth-based” deck, meaning it follows the number and naming structure of Aleister Crowley’s Thoth Tarot, which has a few key differences from decks with a Marseilles Tarot or a Rider-Waite Tarot based structure. All of the differences described here refer to this deck, and to the Thoth deck on which it is based.  The four court cards are titled Knight, Queen, Prince and Princess and are associated with the four letters of the Tetragrammaton (Yod-Hè-Vau-Hè) or Father-Mother-Son-Daughter. The Major Arcana cards have some numbering and naming changes. Trump VIII as “Adjustment” is in Rider-Waite-Smith based decks numbered as XI and called “Justice”. Likewise XI in this deck is called “Lust” and is in the RWS decks numbered VIII and called “Strength”. Marseilles decks, which predate both these systems, for these cards have the naming convention of the RWS but the numbering structure of the Thoth.

For the four suits, in this deck Wands correspond to the element Fire and the creative will, Cups to Water and emotional understanding, Swords to Air and the mind/intellect, and Disks to Earth and the material world. They correlate to the Tetragrammaton as Yod-Hè-Vau-Hè respectively. YHVH is the “god” of creation or a way of dividing the macrocosm.

The Trumps or Major Arcana correspond to Spirit element and each represents one face of the 22 sides of totality. Within the structure of the Major Arcana, the four traditional elements, the twelve astrological signs, the three alchemical elements or three Hindu gunas, and the Sun, Moon and inner planets are represented. The outer planets are also thought to fit in to the existing structure, though there remains some disagreement as to their placement within the elemental cards.

The Major Arcana are portrayed as the twenty-two paths between the ten Sephiroth and associated with the twenty-two letters of the Hebrew alphabet. This deck follows the Thoth deck pattern of assigning the Hebrew letter Tzaddi to the Emperor (Aries) and the letter Hé (Aquarius) to the Star. By doing so, the “twist” in the astrological order of signs in the trumps caused by the flipped ordering of the Adjustment (Libra) and Lust (Leo) cards is balanced and mirrored by a symmetrical twist in the letter assignments for the opposing signs of the zodiac (Aries and Aquarius), forming a sort of double analemma when shown in picture form.

The card backs feature a reversible design, a combination of the four elements suggesting the Rose Cross. In this design the central rose is the element of earth. The water element is shown on the vertical axis, the air element on the horizontal axis and the fire element on the diagonal axis. The Rose Cross is associated with alchemical inner transformative processes; the cross being the human body and the rose the individual’s blossoming and unfolding consciousness. The backs work as reversible for those who prefer to read reversed cards.

The companion book is called the Book of Seshet, and is not only the guide to the Rosetta Tarot, but also has useful information about Astrology and Qabalah as they relate to reading the tarot. So many people have mentioned that they are puzzled by the astrological attributions on many types of tarot cards, and also that they wish they knew more about how the tarot and the Tree of Life work together. The Book of Seshet sheds alot of light in an easy to digest format. It has 240 black and white pages with scans and commentary on each card, chapters on Astrology and Qabalah, and a section with tarot spreads both Golden Dawn based and unique spreads designed for the Rosetta Tarot such as the Fibonacci Rose. The book also has a 6 page color glossy insert with scans of some of the cards.

Seshet in Egyptian mythology is the lesser known feminine counterpart to Thoth, called "The Mistress of the House of Books". As the tarot is a "book of houses"  it semed fitting for her to have a tarot deck in the tradition of the Book of Thoth, and so was born the Book of Seshet and the Rosetta Tarot.

The deck is also available as a pocket size edition in a convenient and portable tin. The first edition of the Book of Seshet is currently sold out but is fully available as part of the Rosetta app by the Fool's Dog, for both iOs (IPhone and iPad) and Android.

Here are some reviews of the Rosetta deck:

And some of Tabula Mundi Tarot: